For the longest time, I’ve wondered if Humble Bundles and Steam sales were hurting or helping the video games industry. There’s not a lot of data about this on the Internet but some indie gamemakers were kind enough to share some numbers on their blogs.

In this post, I’ll try to show why I think Steam sales and bundles are mostly a good thing for video games developers.

A warning: this is mostly going to be some wild speculation, with a few facts peppered here and there. Also, it gets pretty hand-wavy toward the end.

So, do sales and bundles affect negatively the revenue of indie game makers? It would be tempting to think this. After all, there’s like five sales a year, so people may be holding on their money waiting for the next steam mega-sale/humble bundle.

I don’t think it’s true, though. Last week, the Monaco team revealed their day-to-day sales during the humble indie bundle 11 (it ran from February 18 to March 4).

It looks like they made a huge number of steam sales during the humble bundle. Don’t forget there’s 65 million steam users. The humble indie bundle 11 sold 493,000 copies. It’s probably hard to imagine this in the Internet Echo Chamber, but bundle buyers are a tiny portion of steam users. Steam probably makes the equivalent revenue of a bundle daily.

But, I can already hear you “But Karim, this is a humble bundle. It has five games in it. There’s like five steam mega-sales a year, with almost the whole steam catalog. Surely, people must be keeping their money for the big sale just around the corner.”

Again, I don’t think it’s true. The graph below is Dustforce’s net income for 2012: 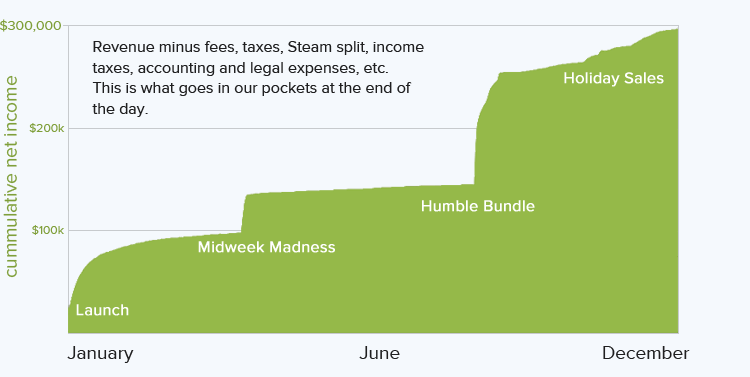 What if instead, the people who bought the game during the steam sale weren’t really wanting to get it?

Steam sales are a great thing for game developers. There’s thousands of choices on the steam store. Valve knows nobody will buy every game, so they figured out the best way to get people to buy more games: making them impulse purchases. That’s why there were four big sales last year.2

It works great. How many people have played more than half of the games in their Steam library?

So yeah, Steam sales are a great thing.

Key takeaway: If you’re an indie developer, you should do Steam Sales.